Moving from Firefox ESR to Firefox Quantum, or bye RequestPolicy

When Firefox Quantum was released last fall I switched to the ESR branch, currently on v52.7.3. My main - and pretty much only - reason for not using Quantum until now was due to incompatibilites with addons not written as native WebExtensions. It’s been over six months since Quantums initial release, and as more WebExtension addons are availabe, I wanted to see if I’d be comfortable with moving on as well.

First of all, Quantum feels much faster than the old Firefox, even with a dozen enabled addons. My main concern was with RequestPolicy Continued, which I used for years to build my own whitelist in order to keep out as much browser tracking as possible. Since there is still no WebExtension port, I started exploring other addons and found that uBlock Origin is capable of everything RequestPolicy can do. I’ve used UO on Firefox before, but only as a general adblock addon with default settings. By denying any 3rd-party resources globally while using the default filter lists for blocking undesired 1st-party content, uBlock Origin has broader capabilites than RequestPolicy. Here’s a nice explanation. But since there’s no way to export my RP whitelist to UO, I had to start over - which is not as painful as I initially feared. UO is a lot more effective in building a global whitelist for Firefox. The UO github has good explanations on it’s different blocking modes.

Here’s what RequestPolicy Continued on Firefox ESR (52.7.3) vs. uBlock Origin in Hard Mode with Firefox 59.0.2 looks like on heise.de. 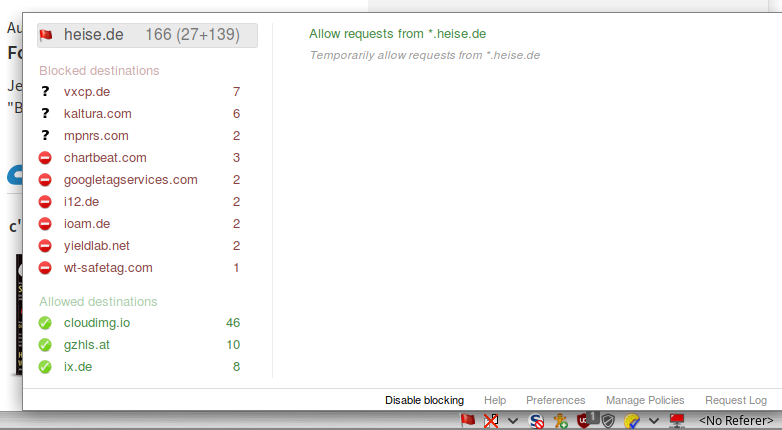 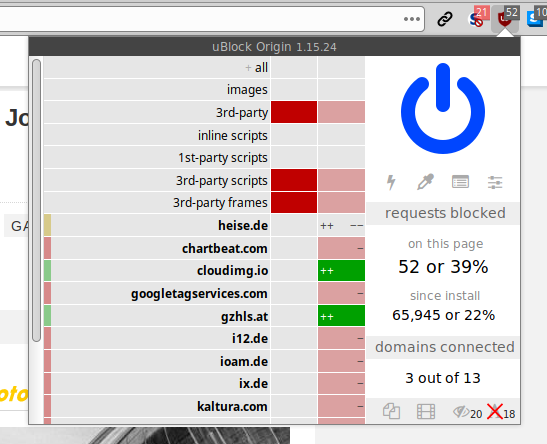 UO is globally rejecting any 3rd-party resource by default and I can create my whitelist on each website below. Note the yellow indicator, which applies the common blocklists to all 1st-party resources. In addition, I disabled web fonts globally in UO (bottom right indicator) which renders websites a little less pretty, but works for me so far.

I had no problem migrating my NoScript whitelist, since it already has a WebExtension port. A few other great privacy-related addons for Quantum include Cookie AutoDelete and Privacy Settings. There’s also an addon disabling Referrers globally, but it’s missing some functionality from RefControl, which I used before.

Overall, I’m happy with migrating to Firefox Quantum. It’s faster, less resource-hungry and I was able to transfer all of my privacy related workflows.